Joel Scott Osteen (born March 5, 1963) is an American Pastor, Televangelist, and Author, based in Houston, Texas. Osteen’s televised sermons are seen by over 7 million viewers weekly and over 20 million monthly in over 100 countries.
Joel Osteen was born into a nuclear family of eight (8) in Houston. His Father, a former Southern Baptist Pastor, founded Lakewood Church (of Which Osteen is the Current Pastor) behind an old feed Store. Osteen Attended Humble High School, a public high School in the City of Humble, Texas, graduated in 1981 and furthered his education at Oral Roberts University in Tulsa, Oklahoma, where he studied radio and television communications, but for some reason unknown to the public, he never graduated; a degree wasn’t given from a divinity School. He returned to houston in 1982 and founded Lakewood’s Television Program, where he produced his father’s televised sermons for 17 years until January 1999, when his father kicked the bucket (died) unexpectedly from Myocardial infarction (heart attack).

He was encouraged by his father to preach for many years but his quest to work behind the scenes, he declined until January 17, 1999 when he accepted his father’s proposal/counsel and preached his first sermon. Two (2) weeks after his father’s death, he began preaching regularly and was installed as the new Senior Pastor of Lakewood church later that year – October 3, 1999. Since then, Church attendance grew from 5,000 to 43,000.
Lakewood Church later acquired the NBA Houston Rockets’ former home, Compaq Center in 2003 which was renovated at the cost of $105 million. The renovations took over 15 months to complete, and included the addition of five stories to add more capacity. Lakewood’s 2005 grand opening was attended by an estimated 56,000 people, including Texas Governor Rick Perry and Speaker of the House Nancy Pelosi.

Lakewood Church services are seen in over 100 countries. Osteen was selected by Barbara Walters as one of her 10 Most Fascinating People of 2006. Former presidential candidate John McCain described Osteen as his favorite inspirational author. The Osteen family attended Easter breakfast hosted by President Barack Obama at the White House in 2010.

Osteen married Lakewood Church co-pastor Victoria Osteen on April 4, 1987. They have a son and daughter. His older siblings, Paul, Lisa, and Tamara, and his younger sister, April, are also involved in full-time ministry. His half-brother Justin does missionary work and is based in New York. 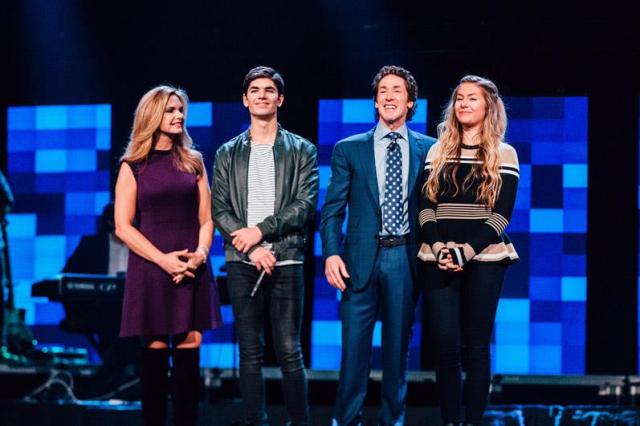 Osteen’s 2017 net worth has been reported to be between $40–60 million. He lives with his family in a 17,000 square-foot mansion in River Oaks, with an estimated value of $10.5 million. As senior pastor, Osteen says he draws no salary from the church, which has an annual budget of $70 million. Instead, he relies on income from book sales. 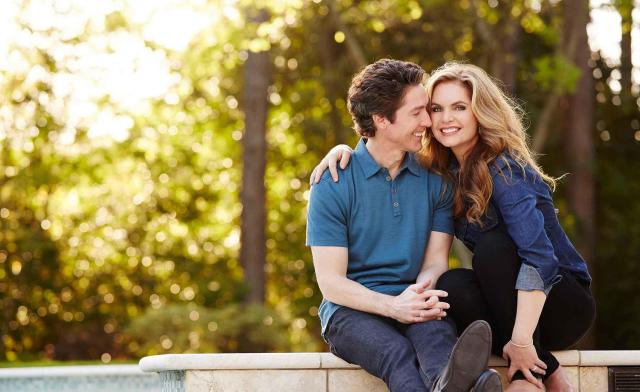 Osteen’s sermon preparation involves memorizing his remarks and listening to himself on tape.
Osteen says that he chooses to focus more on the goodness of God and on living an obedient life rather than on sin. He says that he tries to teach Biblical principles in a simple way, emphasizing the power of love and a positive attitude. When asked why he does not focus more on sin, the devil and hell in detail, Osteen stated in an interview with CBN News:
“When I grew up, the devil was a reason why I had a headache or the devil was the reason I got mad today. We always blamed the devil. I think today when I say the enemy, I like to make it broader. Sometimes the enemy can be our own thoughts. We’ve trained ourselves the wrong way. Or the enemy can be our own lack of discipline. Some people preach about hell like you’re already going there, and to me the Gospel means ‘Good News.’ I’d rather say God is a God of mercy. So I think the people already know what they’re doing wrong, and I certainly believe in hell. But to me, when I see thousands of people before me, it just doesn’t come out of me to say, ‘You guys are terrible, and you’re going to hell.’ I’d rather say that God is a God of mercy. You’ve got to live an obedient life, but for every mistake you’ve made, there’s mercy there, and I believe we can do better.”